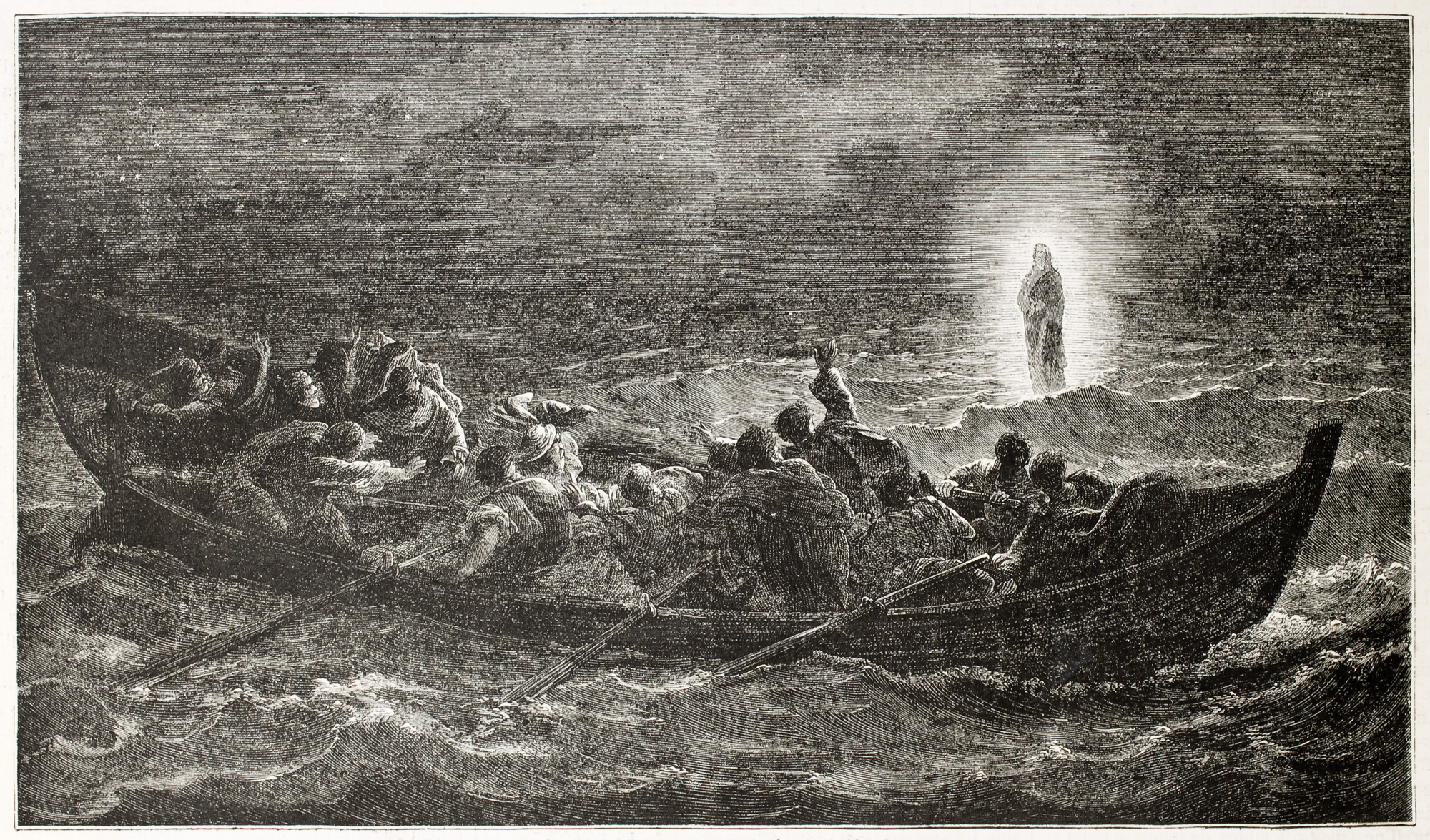 Why Did Peter Begin To Sink?

Matthew 14:22 Immediately Jesus made the disciples get into the boat and go on ahead of him to the other side, while he dismissed the crowd. 23 After he had dismissed them, he went up on a mountainside by himself to pray. Later that night, he was there alone, 24 and the boat was already a considerable distance from land, buffeted by the waves because the wind was against it.25 Shortly before dawn Jesus went out to them, walking on the lake. 26 When the disciples saw him walking on the lake, they were terrified. “It’s a ghost,” they said, and cried out in fear.

27 But Jesus immediately said to them: “Take courage! It is I. Don’t be afraid.”

Then Peter got down out of the boat, walked on the water and came toward Jesus. 30 But when he saw the wind, he was afraid and, beginning to sink, cried out, “Lord, save me!”

31 Immediately Jesus reached out his hand and caught him. “You of little faith,” he said, “why did you doubt?”

32 And when they climbed into the boat, the wind died down. 33 Then those who were in the boat worshiped him, saying, “Truly you are the Son of God.”

Many have read this biblical account and have failed to mention what the story is really about. Biblically speaking, wind and waves represent false leaders, people who follow the false leaders and the doctrine created to cause you difficulty in believing and trusting in God. In other words, false leaders and their followers will cause you to believe ‘doctrine’ that is not true. Their version of the Word causes you to question God, because the information given as the Truth is untrustworthy.(Jas 1:5–8)

The verse says that Peter could not identify Christ. He said to Jesus “Lord if it’s you.” He wanted to know if it was a ghost or a spirit talking instead of Christ Himself. Therefore it is imperative to seek Wisdom so that you can identify who Christ is, because many spirits of error claiming they have the Truth have been sent to cause you to sink.

Peter began to sink in the sea of unholy people and the teachings of wind and waves of the doctrines that caused him to doubt who Jesus/The Word really was.

Ephesians 4: tossed to and fro by the waves and carried about by every wind of doctrine, by human cunning, by craftiness in deceitful schemes

Jude 11 Woe to them! For they walked in the way of Cain and abandoned themselves for the sake of gain to Balaam’s error and perished in Korah’s rebellion. 12 These are hidden reefs at your love feasts, as they feast with you without fear, shepherds feeding themselves; waterless clouds, swept along by winds; fruitless trees in late autumn, twice dead, uprooted; 13 wild waves of the sea, casting up the foam of their own shame; wandering stars, for whom the gloom of utter darkness has been reserved forever.

5 If any of you lacks wisdom, let him ask God, who gives generously to all without reproach, and it will be given him. 6 But let him ask in faith, with no doubting, for the one who doubts is like a wave of the sea that is driven and tossed by the wind. 7 For that person must not suppose that he will receive anything from the Lord; 8 he is a double-minded man, unstable in all his ways.

Why did Peter sink? First of all he doubted who Christ was because he could not identify Him. Secondly he began to sink because the sea caused him to be unstable in his thinking. Thirdly he sank in unholy word, because the water represents ‘word.’ Peaceful waters represent Christ as they are the Words of Christ are harmonious with God. Violent waters are violent words or words that are anti-Christ or against Christ because they cause you to doubt who God truly is.

Believing who God is and doing what God says means that you will have to walk upon or rise above the false doctrine that causes you to doubt God in anything. Doubting comes from misunderstanding. Misunderstanding  comes from lack of wisdom. Lack of Wisdom will cause you to not trust God which in turn causes you to sink in the wind and waves of doctrines that false leaders have taught.

If you keep your eyes on Christ, the true Word, you will walk on the water of the word that was created by man. In doing so, you will not only walk on water but you will walk in harmony with Christ.

It is God who gives the apostles, prophets, evangelists, the shepherds and the teachers. Peter was the first pastor because he was told to feed Christ’s sheep. Anyone whom God did not send does not come “in the Name of the Lord.” That means they don’t have the authority from God to teach or lead you.

11 And he gave the apostles, the prophets, the evangelists, the shepherds and teachers, 12 to equip the saints for the work of ministry, for building up the body of Christ, 13 until we all attain to the unity of the faith and of the knowledge of the Son of God, to mature manhood, to the measure of the stature of the fullness of Christ, 14 so that we may no longer be children, tossed to and fro by the waves and carried about by every wind of doctrine, by human cunning, by craftiness in deceitful schemes.

Heb 13:9 Do not be led away by diverse and strange teachings, for it is good for the heart to be strengthened by grace, not by foods, which have not benefited those devoted to them.